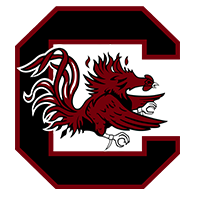 ​South Carolina has seen its star rise again in the collegiate softball world, and head coach Beverly Smith has guided that process since arriving as head coach in July of 2010. She oversees all aspects of the program and works most closely on the field with the pitchers. As a head coach, Smith's overall record is 229-179, becoming only the second Gamecock softball coach with over 100 career wins.
From 2013-17, Smith has guided the Gamecocks to five-consecutive NCAA Tournament appearances, making the regional championship round on three occasions. The team has improved its final RPI from the NCAA from 37 in 2013 to 22 in 2017, while SC matched or exceeded its win total from the previous year in the first four campaigns for the run, rising to 38 in both 2015 and 2016. The team's offense has posted some of its strongest seasons during Smith's tenure, setting 25 team program records in her seven years at the helm. In the per-game team records, Smith's group holds eight of the 16 tracked. Gamecock pitching has improved markedly during that same tenure. From 2013-15, Smith's staff improved its strikeout-to-walk ratio in each season, while the 2016 and 2017 groups posted the program's first earned-run average under 3.00 since 2008 (2.82 in 2016, 2.96 in 2017).